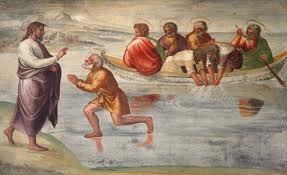 As Christians we are an example to others whether we know it or not. People are watching every move we make, judging and making choices based on our moves. How many times have we made a decision based, not on what God’s Word tells us, but on what we see other Christians doing? Their behavior encourages us to behave in similar ways. This can be either good or bad. It’s good when we make the decision to selflessly serve because we see someone we admire and look up to doing it. Its bad when we get wrapped up in obtaining more “stuff”, ignoring God’s call to work hard so that we can give to others in need (Ephesians 4:28 below), because we see other Christians bound by this same bondage. The behavior of others, whether Christian or not, does not justify sin.

Let him who stole steal no longer, but rather let him labor, working with his hands what is good, that he may have something to give him who has need. (NKJV)

After Jesus was crucified his disciple Peter was beat down and brokenhearted. Not only did he watch his Lord and Savior suffer and die before his very eyes but he also denied him three times! Imagine how you would have felt if you were Peter? How did he respond? Take a look at John 21:3 below:

Simon Peter said to them, “I am going fishing.” They said to him, “We are going with you also.” They went out and immediately, got into the boat, and that night they caught nothing. (NKJV)

This happened right after Jesus was crucified. Don’t forget, Peter was there when Jesus told the disciples he would be crucified and would be raised up.

Mark 9:31: 31 For He taught His disciples and said to them, “The Son of Man is being betrayed into the hands of men, and they will kill Him. And after He is killed, He will rise the third day.” (NKJV)

Rather than remembering and believing what Jesus had told him Peter chose defeat. He decided to go back to his old life of fishing. And guess what? The others were going to follow him! Peter was leading other disciples towards defeat with him! Think about this, when we make decisions to turn our backs on God’s calling and go back to our old ways of godless living we are leading those who look up to us in the same direction. That’s heavy! We may feel that we are only responsible for ourselves and that other people make their own choices, and that might be so. But we have the honor and privilege to lead people towards Christ, which is exactly what we should be striving to do! And the simple fact remains, we are not responsible for others, but we ARE responsible TO others.

Philippians 2:4: Let each of you look out not only for his own interests, but also for the interests of others. (NKJV)

Thankfully for Peter and the other disciples (and all of us for that matter) Jesus doesn’t give up on us that easily. Despite everything, He showed up on the bank, advising them, once again, on how to catch fish. Check out John 21: 6-10 below:

And He said to them, “Cast the net on the right side of the boat, and you will find some.” So they cast, and now they were not able to draw it in because of the multitude of fish. Therefore that disciple whom Jesus loved said to Peter, “It is the Lord!” Now when Simon Peter heard that it was the Lord, he put on his outer garment (for he had removed it), and plunged into the sea. But the other disciples came in the little boat (for they were not far from land, but about two hundred cubits), dragging the net with fish. Then, as soon as they had come to land, they saw a fire of coals there, and fish laid on it, and bread. Jesus said to them, “Bring some of the fish which you have just caught.”(NKJV)

Peter plunged into the sea. This is such a beautiful picture to me! Here he is, sad and broken, and he sees his Lord standing on the bank. He doesn’t waste any time, he plunges himself into the water. He wants to get to Jesus as fast as he can. This was his redemption! Jesus could have left them there, appearing to others. But he loved them and cared for them and had so much planned for them. He went to them in their weakness and sinfulness and gave them another chance to follow him and to change the world. The others took their time, getting in a smaller boat, dragging the fish behind them. Which would you have been? Would you have cast yourself into the water as Peter did, desperate to get to Jesus? Or would you have taken your time, dragging your “stuff” behind you? Its not surprising to me that Peter, the leader, was the one to abandon all and run to his savior.

If we are to make a difference in the lives of others and lead people towards Jesus Christ we have to abandon our worldliness and ourselves and run with all our might to Him. We can’t base our choices on what others are doing, but on God’s Holy Word. In doing so we will be impacting others, who will in turn impact even more people. Praise Jesus that he doesn’t abandon us in our weakness and sin like we abandon Him! Make a decision now to truly live your life based on God’s commands, not on the commands or actions of others, and see your life and the lives of those around you truly transformed.